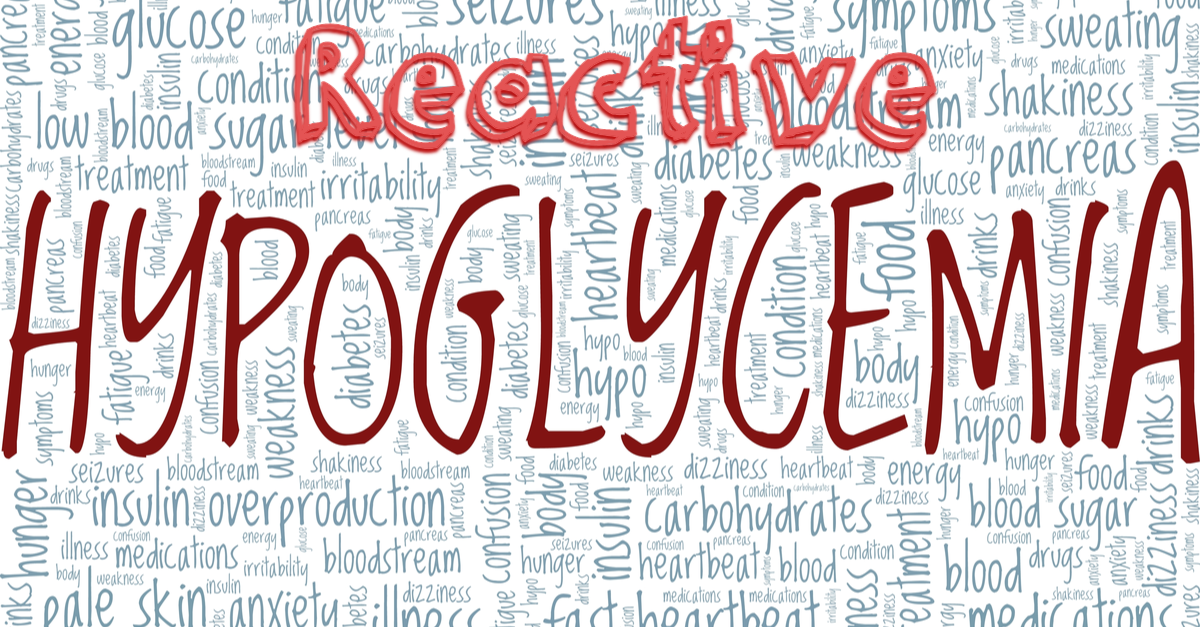 Reactive hypoglycemia, also known as postprandial hypoglycemia or sugar crash, is a phrase used to describe recurring episodes of symptomatic hypoglycemia that occur within four hours following a high-carbohydrate meal in both persons with and without diabetes, as well as in healthy individuals. Because it is necessary to evaluate the patient in order to ascertain the source of the reactive hypoglycemia, the phrase is not always considered a diagnosis.

Individuals' hydration status, as well as their sensitivity to the pace and/or degree of drop in their blood glucose concentration, influence the severity of their symptoms. A crash is often noticed within four hours after consuming a large amount of carbohydrates. Symptoms of reactive hypoglycemia are similar to those of hypoglycemia and include the following.

Most of these symptoms, which are often associated with sensations of hunger, are a direct result of insufficient sugar consumption, since the biology of a crash is very similar to the body's reaction to low blood sugar levels after periods of glucose insufficiency in the first place. If you experience any of these symptoms on a day to day basis, seek reactive hypoglycemia treatment or consult a doctor.

In most cases, the reason for reactive hypoglycemia is not known. Several hypotheses have been advanced as to why it happens, including a lack of specific hormones or enzymes, however there is no agreement among experts on the cause of the condition.

Although there are various disorders that are known to induce non-diabetic hypoglycemia, the most common are listed below. They are as follows:

If you believe you may have had an episode of hypoglycemia or have noticed or exhibited reactive hypoglycemia symptoms, see your doctor. They'll inquire about your symptoms, medical history, and whether or not any members of your family have suffered from diabetes. Your blood sugar will be checked while you are experiencing symptoms and compared to a reading obtained after the symptoms have subsided. Most often, this is the way a diagnosis is obtained.  A mixed-meal tolerance test, often known as a MMTT, may be required. You'll be given a sweet drink that will elevate your blood sugar levels and drive your body to produce more insulin as a result. During the following 5 hours, your blood sugar levels will be checked numerous times by the doctor to see whether your levels have dropped too low. If you do get the diagnosis of reactive hypoglycemia, do not take it lightly and make necessary lifestyle changes to avoid further complications to your health.

The kind of treatment you get will depend on your reactive hypoglycemia causes. If you have diabetes, you should monitor your blood glucose levels. For patients with diabetes, a blood glucose level less than 70 mg/dL indicates that they are hypoglycemic. 15 grams of carbs should be consumed, and your blood sugar should be checked after 15 minutes. If it's still below 70 mg/dL, you should consume another portion. Consult with your doctor to determine if you need a new treatment plan. The particular reason for your hypoglycemia will be determined by you and treated accordingly by your doctor. Suppose a medication or a tumor is causing your hypoglycemia. You may need a new medication or maybe surgery to correct the problem. If reactive hypoglycemia is caused by a medical condition, treatment will focus on treating or controlling the disease. This may include surgical removal of an insulinoma or, in the case of NIPHS, partial removal of the pancreas itself.

Reactive hypoglycemia is defined as a dip in blood glucose (sugar) after eating. Symptoms often appear four hours after eating and include shakiness, dizziness, nausea, fast pulse, and perspiration. Severe instances might result in fainting and convulsions. Reactive hypoglycemia is unrelated to diabetes, and the majority of episodes have no recognised etiology. The therapy usually consists of ingesting fast-acting carbs that may rapidly restore blood sugar levels to normal. Reactive hypoglycemia and exercise go hand in hand as it can be prevented via certain methods of workout and leading a healthy lifestyle. Read it and use this article as a guide.

The cause isn't always straightforward. Reactive hypoglycemia is most likely the consequence of your body producing an excessive amount of insulin after a substantial, carbohydrate-heavy meal. Scientists are baffled as to why, but your body may continue to produce additional insulin long after you've finished your meal, according to some theories. Because of the additional insulin, your blood glucose level drops below normal. Aside from tumors and alcohol, reactive hypoglycemia may occur as a consequence of surgical procedures such as gastric bypass or ulcer therapy, as well as various metabolic illnesses. If you're overweight, you're more likely to experience it.

In most cases, reactive hypoglycemia does not need medical intervention. Any underlying medical ailment, on the other hand, will need to be addressed. Dietary modifications are often effective in alleviating your symptoms. Make alterations to the time and substance of your meals and try to eat a fully balanced diet. If you have a diabetic condition beforehand, then you must consult a doctor for reactive hypoglycemia treatment.

How do you fix reactive hypoglycemia?

To fix reactive hypoglycemia or reactive hyperglycemia, the first thing to do is consult a doctor. If reactive hypoglycemia is caused by an underlying medical condition, therapy will be directed at resolving or managing the condition. This might entail surgically removing an insulinoma or, in the case of NIPHS, partially removing the pancreas itself. There are two therapy options for all other situations. The first is understanding how to react to hypoglycemia spells. The second step is to make lifestyle adjustments to avoid future occurrences.