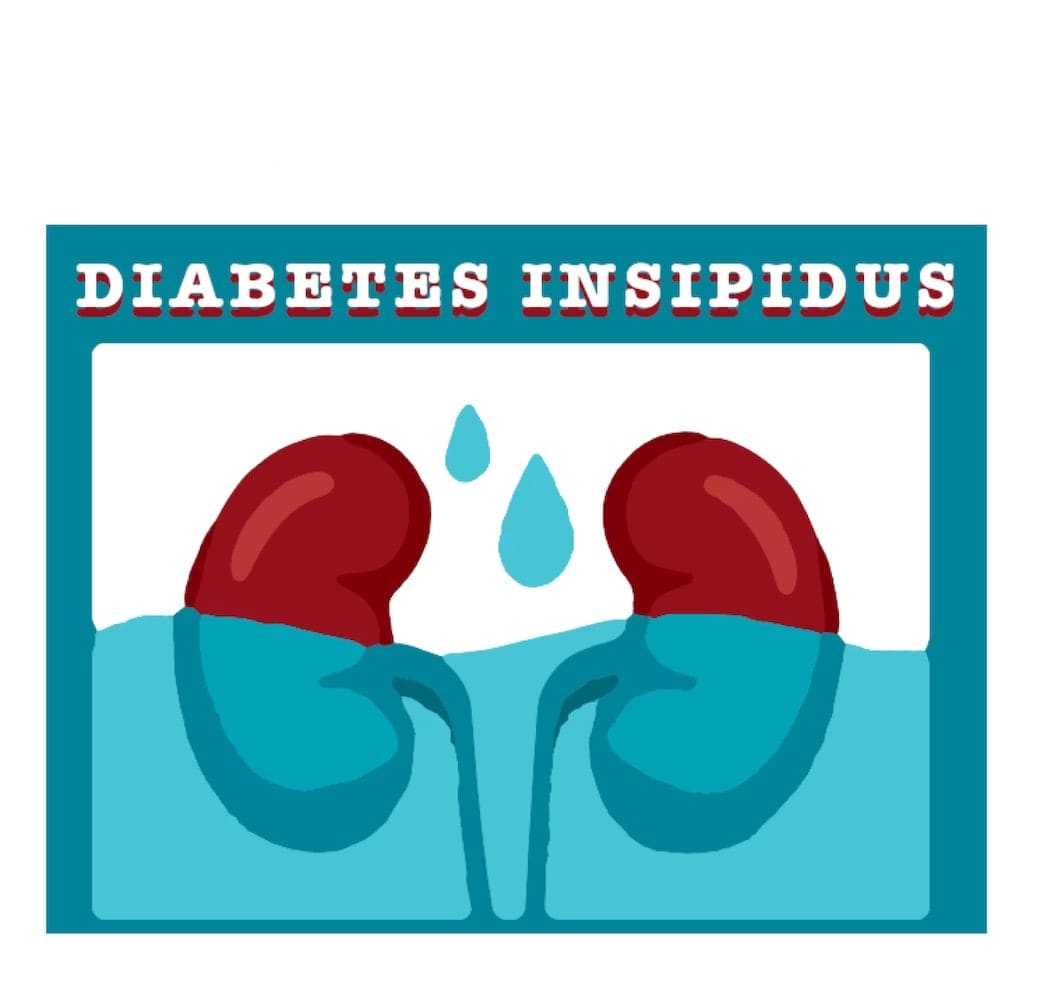 What is Diabetes Insipidus?

The name of this disorder might suggest that it is related to diabetes mellitus, but this is not true. While diabetes mellitus is a disorder where blood sugar levels are high and can fluctuate, leading to severe health concerns, diabetes insipidus is a rare disorder that causes dehydration due to excess urination and an imbalance of bodily fluids. Anyone who suffers from this disorder feels very thirsty very often. Diabetes insipidus does not have a cure to date. But some specific procedures and treatments can relieve the symptoms. Steps can be taken to help the individual to reduce their urination and thus prevent the excessive loss of water from the body.

Diabetes insipidus is caused by multiple reasons, the body cannot keep the balance of fluids intact. This disorder is called diabetes insipidus. Blood passes through the kidneys, and its fluid is filtered to remove impurities. Most of this fluid is sent back into circulation inside the body. Some of it, along with the impurities, is excreted in the form of urine. An enzyme called vasopressin or antidiuretic hormone (ADH) ensures that most of the fluid is recirculated back into the body. The hypothalamus in the brain manufactures this hormone, and it is stored in the pituitary gland.

‍What causes diabetes insipidus is either insufficient production of antidiuretic hormone or some factors that may prevent the hormone from having a full effect. Following are the causes of diabetes insipidus according to the type of the disorder:

When the kidneys' structure is defective, and thus the kidneys cannot work properly with ADH.

Dipsogenic diabetes insipidus is another name for this condition. It is responsible for the production of large quantities of diluted urine. It occurs when the thirst regulation is faulty. It has been found that this condition can be linked to mental disorders.

Any damage or injury to the pituitary gland or hypothalamus that affects ADH storage or production can result in this condition. Sometimes inherited genetic factors can also cause central diabetes insipidus.

Even for diabetes insipidus, this particular form of the disorder is rare. This occurs when an enzyme produced by the placenta destroys the ADH made by the mother’s body.

What are the 3 p's of diabetes?

The most common symptoms of diabetes are -

The main signs of diabetes insipidus are -

Since the amount of fluid output is more than normal, it is important for the person to increase the intake of fluids or it can cause dehydration.

Some common symptoms of dehydration include -

If you are experiencing any of the diabetes insipidus symptoms for a long time despite a normal lifestyle, then it is a good idea to visit the doctor. The symptoms in children may be different from adults. Symptoms that you may observe in children -

What are the Four Types of Diabetes Insipidus?

The different Types of Diabetes Insipidus are defined by its different causes.

This is diabetes insipidus that occurs during pregnancy when an enzyme produced by the placenta destroys the antidiuretic hormone. The placenta is an important part of the foetus’ nutritional channel. This condition usually goes away after the pregnancy.

If the hypothalamus and the pituitary gland are damaged due to some injury, and the production or storage of ADH is affected, it results in diabetes insipidus.

When there is some structural defect in the kidneys that prevents them from responding properly to ADH, it can often result in diabetes insipidus. Possible reasons for kidney damage can be medications, mechanical injury, blockage of the urinary tract, imbalance in the number of electrolytes, kidney diseases.

Sometimes, the thirst mechanism that is regulated by the hypothalamus does not function properly. This causes the individual to feel extremely thirsty and produce copious amounts of urine. Dipsogenic diabetes insipidus is also known to be associated with certain mental health disorders too.

How do you Test for Diabetes Insipidus?

The main Tests used to diagnose Diabetes Insipidus are -

An MRI is a non-invasive imaging technique that uses a magnetic field to create accurate brain tissue images, that help identify any abnormalities in the pituitary gland or the hypothalamus.

In cases of low water intake, our body produces the Anti-diuretic hormone (ADH) which prevents dehydration by restricting the amount of fluid lost in the urine. The Water Deprivation Test involves monitoring an individual who has not consumed any fluids over several hours, where along with assessing the concentration of urine/blood, urine output, measuring the amount of ADH produced is the key parameter to determine whether the body is producing adequate amounts of the hormone.

A family history of the disorder may need to be taken to determine whether an individual is at risk of having the condition of diabetes insipidus.

If an infant has nephrogenic diabetes insipidus at or shortly after birth, then the chances are that genetic factors cause it. This type of diabetes insipidus is usually found in males, but the gene can be passed onto offspring by carrier mothers.

The following complications occur due to diabetes insipidus:

●  Dehydration occurs due to the loss of a large quantity of bodily fluids. This can lead to a dry mouth, changes in the quality of the skin, fatigue, and a constant feeling of thirst.

Essentially, there are 4 types of diabetes insipidus. Treatment for each one is different and some are incurable however, the symptoms can be managed using medication.

Diabetes insipidus is not a common disease among people and generally, it does not cause major serious problems to the body. The complications that could be caused due to diabetes insipidus include dehydration and electrolyte imbalance. Though it is a rare condition where the kidney fails to perform the task of excretion properly, this disease hasn’t found any cure yet. Not life-threatening but one can take proper nutrition and medication and reduce the impact it creates on the body.

What are the 3 Ps of diabetes insipidus?

The 3Ps of diabetes insipidus, also known as the symptoms of diabetes insipidus are polydipsia, polyuria, and polyphagia. Simply, these three respond to an increase in thirst, urination, and appetite in a person. A person with these three Ps might experience getting thirst frequently, urinating more often, and a drastic change in appetite. It is not necessary that a person with diabetic insipidus may experience these three Ps all at once but if you experience two or more of these symptoms frequently, you must get yourself checked.

What are the cardinal signs of diabetes insipidus?

The cardinal signs include the 3Ps that are Polydipsia, polyuria, and polyphagia which means increased thirst, urination, and appetite. Experiencing these signifies that the person has a higher risk of having diabetes insipidus. Apart from these cardinal signs few other symptoms like having colorless urine, dry skin, constipation, weak muscles, and disruptive sleep due to frequent urination should also come to your attention if you feel you might be diagnosed with diabetes insipidus.

What is the difference between diabetes and diabetes insipidus?

While the names can get confusing, the two conditions are markedly different. In diabetes mellitus, the glucose levels in the body are too high and therefore, are also present in the traces of urine as the kidneys try hard to expel them. Here, the hormone that plays a major role is insulin.

In diabetes insipidus, there is the active involvement of the kidneys. Even though the blood sugar levels of the body are normal, the kidneys do not function well as they do not concentrate urine. ADH is the hormone that is key here.

What happens if diabetes insipidus is left untreated?

Diabetes insipidus requires treatment immediately as the symptoms are observed and the diagnosis is made. In case it is left untreated, it can lead to dehydration and also coma in severe cases. This is because there is a massive increase in the concentration of salts in the blood – sodium in particular. This condition can also lead to major issues in the kidneys.

‍
When do you suspect diabetes insipidus?

The first sign of this condition would be the urge to pee more than normal. Wanting to pee at frequent intervals and excessive thirst can be warning signs for diabetes insipidus. These primary symptoms are common with diabetes mellitus, so a proper diagnosis would be important before any course of action is taken.

Can you live a normal life with diabetes insipidus?

Yes, even after the diagnosis of diabetes insipidus, with a few precautions and medications, one can live a perfectly normal life. The symptoms can be controlled with timely medication and doctor visits and this does not have to affect the quality of life of the individual diagnosed.

Diabetes insipidus is caused by problems with a hormone called vasopressin (AVP) which is also called as antidiuretic hormone (ADH) when your body can't properly balance the body's fluid levels.The cause is the body’s issue with making or processing antidiuretic hormone or ADH. ADH helps to balance the amount of fluid in your body. Sometimes, healthcare professionals are unable to determine a cause as well.

There are 4 types of diabetes insipidus. The underlying causes of all 4 are different. However, in short a person produces more urine than the normal quantity (9 to times more) and feels more thirsty.

What happens during diabetes insipidus?

During diabetes insipidus, the person produces much more urine than how much a person normally produces. This can put the person at a serious risk of dehydration. The treatment depends on the causes and medications recommended by doctors.

What are the initial signs of diabetes insipidus?

Polyuria and polydipsia are the first signs of diabetes insipidus. Polyuria is the condition where one urinates more than the normal amount. Polydipsia is used to describe excessive thirst.

When do you suspect diabetes insipidus?

If one is experiencing constant thirst and frequent urge to urinate irrespective of day or night, it can be a symptom of diabetes insipidus.

Which drug can cause diabetes insipidus?

Long-term usage of lithium is most likely to cause nephrogenic diabetes insipidus. It can damage kidney cells and be the cause of imbalance of fluids.

Yes, diabetes insipidus can damage kidneys when it goes untreated for a long time. The dehydration and disrupted sleep can also cause much damage.